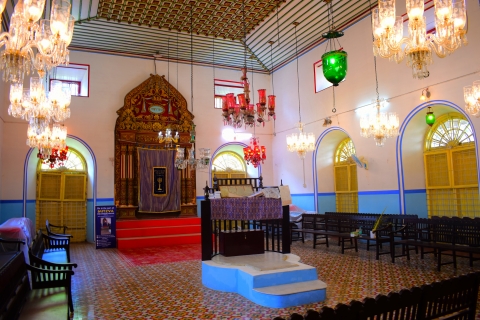 Local place Name Mattancherry, its Near to Ernakulam City [ Cochin City ] in the Jewish quarter, Paradesi, the oldest synagogue in the Commonwealth was built in 1568 after Jewish refugees from Jerusalem settled here during the Crusades. More then 8 Jewish Synagogue In Kerala but most of them are not operating anymore . Mattacherry Synagogue is White Jews It is one of the very few synagogues used in India with its unique structure having two  Each of these is quite unique in its construction and architecture .

Bimahs, resulting from Hindu-Christianist architectural influence. Many Jews lived in the area until Israel was established, now only a handful remain. Jewish Street is an area with several antique and many craft stores .  and is a popular tourist destination in Cochin . Sunday to Thursday from 10 a.m. to 5 p.m. only allowed to Tourist . Vehicle not allowed parking there .