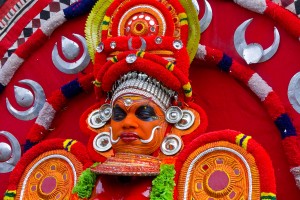 RAIL: Kannur is an important railhead of the southern railways.

Of Family Heirlooms and Bad Karma

Kannur Capture the essence of Kerala’s diversity. Holding within the folds its breathtaking scenic spectrum history, culture and tradition. A world of folk tales & fold music. It is also home to the fabled martial art Kalaripayattu, Every weft and weave of Kannur’s rich fabric recreates scenes of velour, heroism and fierce battles. Explore a unique people Take in the flavor of Kerala …

In Kannur there are currently 53 major temples where, from December to May around a hundred different types of theyyam are enacted. In temple courtyards and ancestral groves , his dusky face painted in earth pigment , fiery torches forming an aureole around his thatched –leaf skirt ,and balancing a headgear half the size of a palm tree , the typical the theyyam Dances into the wee hours. Finally, as the brighter stars defy the pink of a face down and continue to shimmer tantalizingly, the theyyam goes into a trance. He is now fully ‘possessed ‘by the deity and whatever he utters has oracular urgency. This is the crowning moment of the entire ritual…

2k.m from Kannur This beach is famous for its flat laterite cliffs that jut into the sea. The well-laid gardens and the massive landscaped sculpture of ‘Mother and child ‘make it extremely captivating.

3k.m from Kannur this was the residence of the former arakkal Ali Rajas, the only Muslim royal family of Kerala.

3K.m from Kannur This  seafront laterite fort was constructed in 1505 AD by the first Portuguese viceroy, don Francisco de almeda , with the consent of the ruling kolathiri raja. After changing hands from the Portuguese to the dutch and then to the English ,the fort became one of the important military centres of the british in Malabar. The fort, which is now under the archaeological survey of india offers fascinating views of the mappila bay fishing harbor .

7K.m from Kannur. The small town on the valapattanam River is well known for its woodbased industries and timber trade. The port of azhikkal and azhikkal beach are located nearby .

11K.m from Kannur This beautiful stretch of sand is one of the most secluded beaches in kerala.

12K.m from Kannur Uncrowded ,the beach is a tourists paradise with golden sand and surf.

18K.m from Kannur Sri muthappan temple stands on the banks of valapattanam river this pilgrim centre is famous for the muthappan theyyam perfomed every morning and evening the DTPC provides pleasure boating on the river near the temple .

16K.m from Kannur This is the only one of its kind in the state and perhaps the whole of india. There are three snake pits , fifteen glass cases for snakes and two large glass houses for king cobras in the park . Snake demonstration conducted every hour draw large crowds of visitors.

16K.m from Kannur  Black rocks protect this long , clean beach from the currents of the deep making its shallow waters a swimmer’s paradise. Perhaps this is kerala’s only drive-in beach where you can drive down the entire length of 5 K.m.

20K.m from Kannur Dr. Herman gundert the revered german missionary , schoar and lexicographer lived in this bungalow for 20years from 1839. It was here that one of the fist Malayalam dictionaries and the first Malayalam Newspaper Paschimodayam .

22K.m from Kannur The fort constructed in 1708 was the military center of british it is now a Historical Monument.

23K.m from Kannur This temple dedicated to sir rama is one of the most important temple are said to have been done nearly 400 years ago.

25K.m from Kannur The madayi kavu temple the vadukunnu temple and the 12th century mosque built by malik bin dinar with white marble imported from arabia , are the major attractions here there is also a dilapidated fort at madayi which is supposed to have been built by tipu sultan of mysore . the view from the fort is fascinating .

34K.m from Kannur This temple is famous for its mural paintings. It is believed to have been constructed 2000 years ago and was closely connected with the pazhassi raja family.

37K.m Kannur An ideal retreat for tourists, the damsite is famous for its scenice beauty .

55K.m from Kannur the beautiful beach here has a hillock nearby [286m high ] carved stone pillars and an ancient burial chamber can be seen at the foot of the hills. The hill are noted for rare medicinal herbs.

65K.m from Kannur this enchanting hill station , situated 4500ft  above .its a beautiful view .

Famous for its Anna poorneswari temple . the week long annual festival falls in april .there is a Kathakali-panchavadya school called asthikalalaya near the temple .

There is a siva temple here on the banks of the bavali river. thousands of devotees attend the annual 27 days festival during may-june.